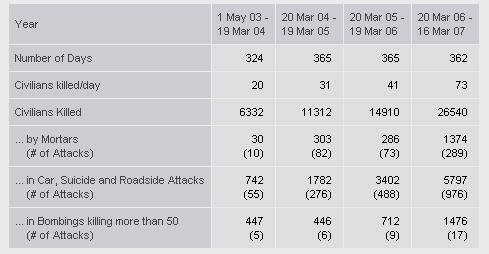 The graphs above show two different views of the violence in Iraq. Looking at the first it shows a reduction in civilian deaths through October 2007. The second view, from the Iraq Body Count shows the average yearly fatalities since after the invasion/liberation (take your pick...) of Iraq, and shows that through March 2007 (the previous graph goes through October..) the fourth year post-intervention has been the bloodiest...

Since the "surge' began violence has decreased. According to a MNF-I briefing October 24th, 2007 in Baghdad "...there has been a 59% reduction in terrorist operations against innocent Iraqi people; terrorist operations against Iraqi security forces have decreased by 62%; the number of sectarian-driven assassination attempts has reduced by 72%; the total amount of car bombs has declined by 65% while IED attacks over the past four months have similarly decreased by 60%; in turn, there has been an 81% decrease in civilian fatalities caused by car bombs, including IEDs..." One may argue re the reasons for these reductions - is it because of the surge and U.S. military successes, or is the reduction in violence due to the fact that Baghdad neighborhoods are now effectively segregated (Sunni & Shia) given the huge dislocations of families, etc? Either way the reduction is welcome.

Unfortunately, however good these numbers sound, there's still a very long way to go to get remotely close to 'normalcy.' Let's put things into context and do the math.... At one point, across Iraq, there were approximately 2,000 sectarian killings a month... this was by no means the highest month, but for this exercise let's take this as an average month. Similarly there were also approximately 2 IEDs/VBIEDs/suicide bombers a day. In other words even if reductions of 90% and approximately 96% were achieved, this would still represent a "mere" 200 sectarian killings along with 2 IEDs/etc. a month, a level of violence still unacceptable in almost any part of the world... And the "surge" is drawing to a close!