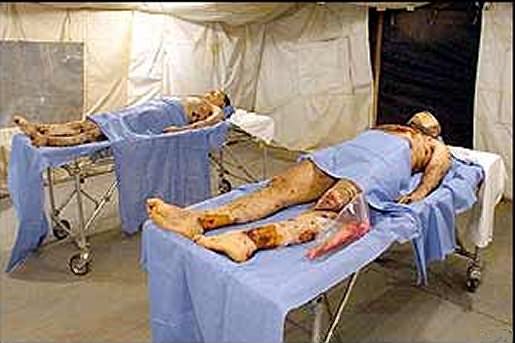 The "Ace of Clubs" and the "Ace of Hearts" Qusay and Uday, the sons of Saddam Hussein, were killed in a firefight in Mosul July 22nd. Few (if any) will mourn the passing of this incredibly brutal pair, or miss their presence... The question now being posed is whether their demise will help with the pacification of Iraq. The jury is out on this, and only time will tell. The administration seems hopeful that the end of the brothers will demoralize those attacking U.S. troops, who will now "..melt away.."

However, this seems like wishful thinking. The two had no future to look forward to, their eventual capture or death being a certainty. Of all the outcomes possible, what occurred last week was the "best" (from their viewpoint) that they could look forward to. The worst would have been capture and trial, when the two would have been paraded in shackles and jumpsuits, shorn of the appurtenances of power, and exposed as the weaklings they are without brutal henchmen around them to enforce their will. As bad would have been their being quietly killed and dumped by former associates, or their having been found and lynched by an angry mob of Iraqis... Instead they went out in a big firefight. The fact that the two brothers along with a single bodyguard and Qusay's fourteen year old son, lasted six hours after the villa they were in was surrounded by 200 U.S. troops in a "cordon and knock" operation, and then attacked by MK-19 grenades, 50 caliber machine guns mounted on Humvees, rockets and machine guns on Kiowa helicopters, as well as ten TOW missiles, might (if anything) encourage their associates and followers... Uday and Qusay alive and begging for their lives would have been far more demoralizing to regime diehards than the two brothers dead and "martyred" after a "glorious" fight against overwhelming odds.

The question of who is responsible for the hit and run attacks on coalition forces remains to be answered. Is it just remnants of the old regime - unrepentant Baathists, Fedayeen Saddam, and Special Republican Guard members - as reported, or is opposition to the coalition forces more widespread? It is very hard to tell from news reports. There is also a dichotomy between U.S. and foreign news sources - while U.S. news sources report sweeps with extremists killed and many "thugs", "criminals", "guerillas", "Baathists", etc. arrested, foreign news sources provide a much more nuanced picture, with many examples of innocent folks getting swept up in these (either in error or because they were in the wrong place at the wrong time.) U.S. news outlets are doing the country a disservice by presenting everything as being either black or white and not reporting the shades of gray...